Stop CANAMEX, Stop the Intermountain West Corridor and I-11! Stop the Sun Corridor! Stop the 202!


Benefit show for Standing Rock and No 202 Resistance 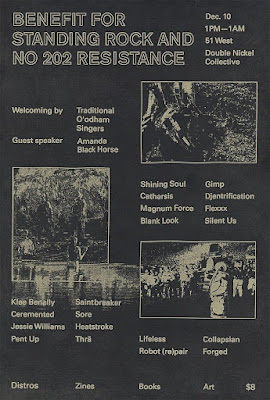 The Pima County board of supervisors voted to delay the decision to afford Monsanto tax breaks on the land they purchased in Avra Valley for a giant greenhouse in which to seed for GMO corn. The land lies between a proposed Interstate 11 alignment and the I-10.

Monsanto was hoping to quietly benefit from their land becoming designated as a Foreign Trade Zone (FTZ). FTZs function like inland ports in which businesses get tax breaks and duty exemptions and deferrals, as tax incentives. The presence and authority of the Customs and Border Protection (CBP) in these foreign trade zones have unknown implications for migrants within them.

Posted by chaparral at 4:33 PM No comments:

This media release was sent via email from the Avra Valley Coalition.

A review of the public comments gathered at five “public scoping meetings” in June, 2015, by the Arizona Department of Transportation shows a large majority favoring “enhancing or expanding existing highways and freeways” rather than building a new highway.  Written comments from the more than 500 people attending those meetings run seven to one opposing a new interstate.  Most attendees came from the Tucson-Marana area and most of  those objected specifically to a new highway through the Avra Valley as proposed by Pima County Administrator Chuck Huckelberry.

According to ADOT Community Relations Manager Laura Douglas about 150 people attended the Tucson meeting, with another 150  in Marana; Casa Grande had 51 attendees, Buckeye  53, Nogales 41, and Wickenburg 95.  An additional 300 comments were received outside of the public scoping meetings, but those are not yet available for review.  While some of the attendees thanked ADOT “for allowing all the input,” it is not clear that the voice of the public will be heard in determining the future of I-11.

Project Director Jay Van Echo acknowledged in a May 18 meeting with Avra Valley activists that there were only two possible routes, along the existing I-10 or through the Avra Valley.  According to emails obtained by the Arizona Daily Independent, the Avra Valley route as first choice was made before the $15 million Tier One Environmental Impact Study was underway.  Here is a June 10, 2016, email from Pima County Economic Development Director John Moffat to County Administrator Huckelberry and his assistant, Nanette Slusser:

While the Pima County Board of Supervisors is on record in Resolution 2007-343 opposing any I-10 bypass in Pima County, Huckelberry and his staff have been allowed to use county resources to promote the Avra Valley route, and the BOS supported the McCain-Kirkpatrick-Grijalva amendments to the FAST Act designating I-11 and its Sonoran Corridor leg, formerly named “I-11” on county maps, as interstates eligible for federal funds.

Opponents of I-11 note that planners envision a future with research and development in Arizona and Nevada and manufacture and assembly in Mexico where they believe wages will be lower than in China.  They call that “integrative manufacturing.”  They also hope to attract American companies from China to Mexico, called “nearshoring,” and to steal jobs from the West Coast to the expanding Port of Guaymas.  An Avra Valley route would hurt tourism at places like the Desert Museum and Saguaro National Park, take away Kitt Peak’s needed darkness, and lose jobs along the existing I-10 corridor.  It would also negatively impact communities and wildlife, along with ancient archeological sites.

Candidates for the Board of Supervisors Ally Miller and Kim DeMarco have publically opposed an Avra Valley I-11 route, while the other incumbents have been silent as the County Administrator beats the drums.  The Green Party candidates also oppose it, while Steve Christy – who served as chair of the State Transportation Board when the I-11 EIS was approved – favors the Avra Valley route.

The Sonoran Corridor, listed as an “auxiliary highway” to avoid the bypass conflict, was shown on county maps as I-11 and its curious configuration links with the “Huckelberry Highway” at I-19.  The Sonoran Corridor was also rejected by voters in last November’s bond election, but that hasn’t slowed down Huckelberry or BOS Chair Sharon Bronson from looking for ways to advance it.

Bronson’s opponent in the election, Kim DeMarco, along with L.D. 11 state legislators Steve Smith and Vince Leach, have publically stated their support for double-decking part of I-10 rather than ruining the Avra Valley.  That option, according to ADOT, would cost one-third that of a new highway and save taxpayers nearly $2 billion.  LD 11 State Senate candidate Ralph Atchue isn’t sure how much input state legislators will have, and prefers the highway not go through the Avra Valley.

Posted by chaparral at 3:21 PM No comments:

This blog is based in the Phoenix-area which is occupied O'odham land, hence the focus on this regional area, despite being opposed to the entire CANAMEX concept. The research was motivated largely by the interest of tying the struggle against the Tar Sands in Alberta to the struggle against the Loop 202, resulting in a realization that despite knowing about CANAMEX, it is far less marginal that previously thought. This is a completely volunteer project. Please credit this blog when making use of its content.

New to the site?

For background information on CANAMEX, read Highway to Hell? CANAMEX, Loop 202, and the Tar Sands

or start with the CANAMEX Basics

What's the difference between CANAMEX, I-11 and the Intermountain West Corridor? Read Filling in the I-11/CANAMEX Gaps

It seems counterintuitive, right? Rip out eight lanes of freeway through the middle of your metropolis and you'll be rewarded with not only less traffic, but safer, more efficient cities? But it's true, and it's happening in places all over the world. Read more...